Seattle, WA (July 15, 2015) — Renewal by Andersen, a division of Andersen Corporation, was ranked highest in customer satisfaction with windows and patio doors for the first time, according to the J.D. Power 2015 Windows and Patio Doors Satisfaction Study* released in June.

“This ranking is an honor for everyone who works at Renewal by Andersen,” said Paul Delahunt, president of Renewal by Andersen. “Ever since joining this company, I’ve been impressed by the dedication and effort that go into ensuring every customer job is done right, but  being ranked highest in customer satisfaction  by J.D. Power is a great achievement for the whole team.”

The study measured satisfaction among customers who purchased windows and/or patio doors within the past 12 months, based on performance in five factors (in alphabetical order): appearance and design features; operational performance and durability; ordering and delivery; price paid for products; services received; and warranty. Satisfaction was measured on a 1,000-point scale by more than 2,400 customers who met the study’s criteria responded.

ABOUT RENEWAL BY ANDERSEN

Headquartered in Bayport, Minnesota, Andersen Corporation and its subsidiaries manufacture and market window and door products under the Andersen®, Renewal by Andersen®, Silver Line® and American Craftsman® brands. Andersen was founded in 1903 and employs more than 10,000 people in locations across North America. Andersen is a privately held company. Visit us at andersencorporation.com.

* Renewal by Andersen received the highest numerical score among window and door manufacturers in the proprietary J.D. Power 2015 Windows and Patio Doors Satisfaction StudySM. Study based on responses from 2,442 consumers measuring 14 brands and measures opinions of consumers who purchased new windows or patio doors in the previous 12 months.  Proprietary study results are based on experiences and perceptions of consumers surveyed in January – February 2015. Your experiences may vary.  Visit jdpower.com 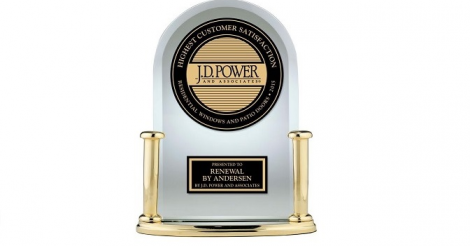